The roof bridges are installed to the roofing cover so as to facilitate the movement – the way from trapdoor to the stack, to the antenna, etc. The roof bridge makes moving on the roof safer, decreases the damage caused to the roof coating by unsuitable footwear. 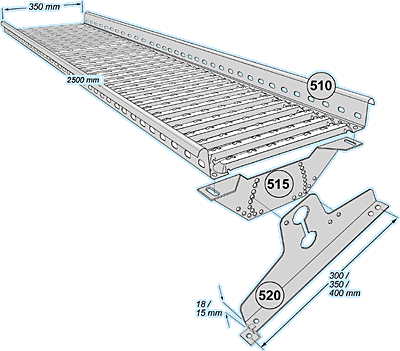 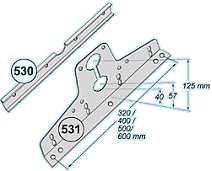 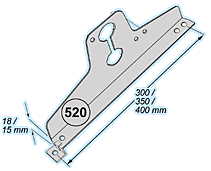 1. Depending on the roofing profile, a suitable bridge fastening is mounted on the roof – either the one for a tiled (520) or sheeting profile (531), or the one for rolled steel roofs (531). The fastening place is chosen at a lathing. The fastening screws are not included in the set, as it depends on the material of lathing. The spacing of bedplates is 1500mm. Three bedplates are installed on the first bridge, and two on each successively joined bridge.

2. Joining decks. In the base of the bridge (515) in the surface of the sheets fastening (top edge) there are 4 holes. The bridge decks are not placed in overlapping to each other, but side by side. The deck is fastened with two bolt-washers, thus in a joint of two decks there should be four sets of bolts.

3. On the bridge fastening, the bridge base (515) with a bolt-washer joint is fastened. The bolts-washers are supplied in a completed set. The bridge base is perforated so as to enable the horizontal position of the bridge decks (510) in roofs with different pitches.

4. The bridge deck (510) is fastened to the bridge base (515) with a bolt-washer joint, for each base there are 2 sets of bolt-washers. The bolt-washers are included in the set.